Posted by Hilary on October 3, 2013 in Hilary Duff | Leave a comment

Hilary Duff (blog/Twitter) lived in Ottawa for four fantastic years while getting her journalism degree at Carleton University. She moved to northern Ontario in mid-2011 to work as a reporter with CBC Radio in Sudbury, but is continuing to foster her love of Ottawa from afar.

I toggled my mouse over the notifications icon.

“So-and-so has asked you to like their page “Ottawa Food Truck Rally.”

At that moment, my stomach growled and my salivary glands awoke.

I’ve been fixated on the idea of this food truck rally ever since.

First, a disclosure and a reflection on times past:

As the description at the beginning of this post says, I no longer live in Ottawa. But my geographical distance hasn’t stopped me from continuing to kindle my love for this city’s burgeoning food scene, especially as it applies to food trucks.

Some of the food truck rally goodies.

When I moved from Ottawa almost a year-and-a-half ago, Ottawa’s food truck scene was only sort of a thing. Stone Soup Foodworks was scooping bowls of delicious, steaming comfort food in limited parts of the city. The mobile truck portion of B. Goods Bakery was keeping me happy and cookie-filled at festivals. And The Merry Dairy was just hitting the pavement for its first summer season, taunting me with its every online location update.

The local media (including myself, at the time), would occasionally post updates about how the city wasn’t issuing any new food truck licenses.

And then, it did. My heart exploded with joy, collectively with many in my beloved former city.

This food truck rally means things have come a long way, and it was so worth driving six hours south to be a part of the day.

So, let’s actually talk about this first annual Ottawa Food Truck Rally, shall we?

The logistics were this: 11 food trucks and a few food carts were parked in a lot at the corner of Norman and Priscilla streets in Little Italy. Once through the gates, people bought food tickets, which in turn could be exchanged for the delicious offerings from the trucks.

And how cool is this? The proceeds of the festival went to the Ottawa Community Housing Foundation so they could create a scholarship. That scholarship is to provide current and future tenants the chance to attend the Culinary Arts program at Algonquin College.

I signed up to volunteer for the event early on, and convinced (without too much difficulty) my friend Ella to help out alongside.

Ella and I were gatekeepers for the rally, meaning we were the two girls frantically grasping and pressing metal devices that looked like a cross between a bike bell and a combination lock. It was our job to use the clickers to record everytime someone walked through the front gates, which was about every second for the entirety of the event. We also became pseudo ‘bouncers’ at the gate, working crowd control and looking incredibly intimidating.

“Crowd control” also meant I could chat (using a very stern voice, of course) with people as they were waiting to get in. My favourite exchange was with a guy who told me his friend had been at the rally earlier in the day, but had since left after enthusiastic sampling led to heartburn. Little did I know I would be facing the same predicament just hours later. 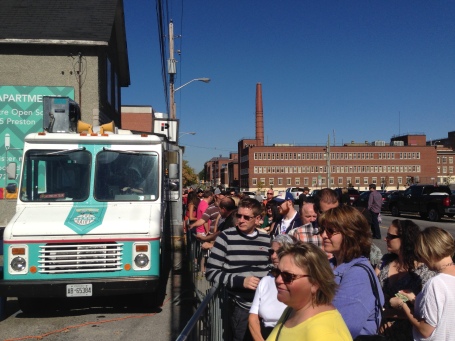 The line up before the gates opened at noon – all the way down the block!

Other than helping launch what I know will be a successful event for years to come, there were a few selfish perks brought about through volunteering. Namely, food tickets, as well as free entrance to the entire rally. On our break, Ella and I wandered the parking lot, taking in the sights, smells, and tastes of the festival.

Food truck gatherings are great for this mingling of cuisines. Where else can you munch on icing sugar-dusted beignets while waiting for a dosa (South Indian crepe)? Not to mention the simple pleasure gleaned from standing on your tippy toes to watch freshly chopped cilantro and spices be sprinkled on your food. There’s nothing quite like that ‘prepared fresh on board’ flavour.

Ella and I had our first food truck taste at Pizza e Panini, where we split a margherita pizza and a prosciutto pizza covered with a bed of arugula. There was also my personal favourite of the day (due to both taste and ridiculousness of concept) – pulled pork on a freshly made waffle, courtesy of the folks at Bytown Bayou. 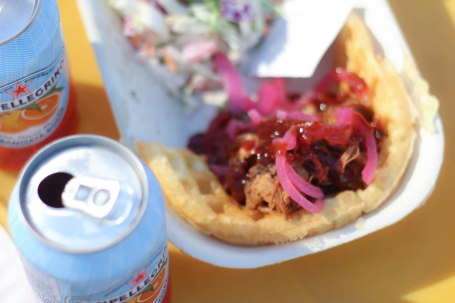 The pulled pork waffle and coleslaw from Bytown Bayou.

As the clock approached 4 p.m., some trucks began selling out. Ella and I finished clicking in attendees and, perhaps predictably, we found ourselves in search of more food.

Satisfied festival goers generously handed out their remaining tickets to friends, and Ella and I found ourselves in possession of 10 more tickets. Food coma be damned, those tickets were not going to waste. We giggled, pulled up our pants a little higher, and headed back into multiple food lines.

Our second feast of the afternoon was highlighted by a plate full of sriacha-drizzled slaw from the Gongfu bao cart, caramel-filled ice cream from The Merry Dairy, and tender beef skewers from Angry Dragonz (a dish that eventually won the best of the day).

We took our final servings across the street and sat on the steps of a government building. We unabashedly undid the top button of our pants and sat back into the afternoon shade, avoiding what we knew was going to be a well-needed, but sleepy ride home.

Congratulations to Sharif Virani, Christa Allevato, the OCH Foundation and everyone else for such a successful first event!

I’m in Ottawa for the next few days, and am seriously considering a solo food truck crawl on my bike.

I’m hoping I can make volunteering at this rally an annual tradition.

Did any of you swing by the Ottawa Food Truck Rally last Saturday? What did you think? We’d love to hear about your favourite dish!