Home » Melanie Bechard » Ottawa’s El Camino: Have you been? 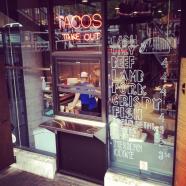 Ottawa’s El Camino: Have you been?

Melanie Bechard is a reporter-turned-communications-professional who wanted to live in Ottawa years before she finally got here in 2007.  She has a dog, a cat, a husband, a garden, an embarrassingly well-organized yarn stash, and a slightly obsessive love of classic movies. She also travels as much as she can.

I’m a great lover of Mexican food.  As a gluten-free vegetarian, it’s one of the few cuisines that remains open to me.

So when I heard a new Mexican-inspired restaurant had opened in Ottawa, I was thrilled. I had been warned that the line-ups at El Camino were long – both for their sit-down restaurant and for the take-out window – so my friends and I arrived at 5:15 p.m. not realizing they don’t open until 5:30 on weekends.

It was just as well we showed up early because by the time the doors opened, there were more than a dozen people waiting to get in.

It didn’t take long to see this isn’t a “restaurant” in the typical sense of the word.

El Camino’s tagline is “Tacos. Tequila. Rawbar”. I’m not sure where the “raw” comes in – there are few raw options on the short menu. But “bar” is an apt description, as much of the seating is along a large bar that spans the length of the room, with some tables with seating for four at the back. The place was dark, the music loud.

The menu is primarily tacos, with a few other options like Mexican corn on the cob, papaya salad, and shrimp dumplings. Our party ordered just about every taco on the menu: beef, beef tongue, pork, and vegetarian (which is not on the menu – you have to ask). The tacos were served in soft flour tortillas, topped with shredded green and red cabbage, a spicy mayo, avocado, cilantro, and jalapeño slices. They generally got good reviews all around: the beef was more flavourful than the pork; the beef tongue was soft like a sausage, unique and tasty. The vegetarian was stuffed with deep fried eggplant, which was good, but I could have done without the heavy breading.

The real highlight of the meal was the guacamole.

Like I said, I love Mexican food, and my husband and I make an effort to try every Mexican place in Ottawa. We were agreed that this was the best guac we’d found. Light, fresh, and tasty, sprinkled with diced tomatoes and cilantro, we nearly licked the bowl. The salsa was also very good.

El Camino is a good place to go if you’re looking for a bar-like atmosphere where you can sit and drink and grab some enticing finger food. For me, who’s not overly fond of a bar atmosphere, I’d go back for the guac, but I’d get it to go.

Thanks Melanie! We’ve heard many amazing reviews of El Camino (including many that love the bar atmosphere!): What do you think?