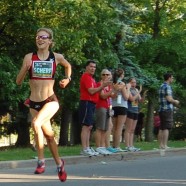 Michelina Teti (Twitter) recently graduated journalism and gender studies at Carleton University. Originally from Brampton, Ont, she’s a huge fan of a great yin yoga class, horrible television and hanging out with a pile of magazines in the traditional print form. She’s also Starbucks and agenda obsessed.
Not only do I love running and racing, I love cheering at races. I might even love it a tad more. Especially at Ottawa Race Weekend.

The organizers of this event deserve a huge round of applause because the event continues to run like a well oiled machine. As one of the first Boston qualifying events, it draws in huge crowds of elite runners. Who wouldn’t want to run the canal anyways? The routes are beautiful.

There is no better way (other than running) to experience Race Weekend than from the side line.

The cheer stations and the fans do one mighty important job. The runners are pure athletes and they deserve all the praise in the world. Whether its the 42.195 km race or their first 5K run ever, it’s no easy feat. While you are pushing through that final K mark, or hitting a wall in the middle, one good sign or a crowd of applause is often all you need to get by.

The excitement and energy while runners run past is palpable, it gets me more and more excited for my training. This is how the seduction of races begin. You start by cheering and soon you’ll be on the course yourself.

I’ll be running my first half-marathon in August, and I look forward to those on the sidelines pushing me through.

Thanks for sharing your photos and story Michelina – and good luck on your half-marathon!

← Meet the ladies behind the Capital’s fashionable cycling blog: Ottawa Velo Vogue You had better van Gogh to this exhibit →