Posted by LTO on February 5, 2012 in Geneviève Brisson | Leave a comment

Geneviève Brisson (Twitter) is a master’s student in communication at the University of Ottawa, working on a thesis on gastronomic tourism. An Ottawa native, she has an appetite for discovering everything the National Capital Region has to offer, especially its burgeoning food scene.

I had been meaning to pay Dantessa Italian Restaurant & Bar a visit for a while now, and an online voucher promotion was the little push I needed to finally make my way over to try their pizza.

My boyfriend and I had made a reservation for a Friday night this past January, but realized upon our arrival that it had been unnecessary, as the restaurant was only about a third full. (Perhaps the location is to blame? While Dantessa is situated in the Golden Triangle, it is a block off Elgin Street with its many restaurants.)

As we found out, the restaurant and the adjoining hotel share the use of the washrooms, which may explain why Dantessa serves breakfast and lunch in additional to dinner. Dantessa’s dinner menu is quite extensive, featuring a large variety of pizza, pasta and meat entrées as well as appetizers and desserts.

After some deliberation, we started with the calamari alla grigli, grilled calamari with market greens, which was listed on the menu as a house specialty.

I found the calamari too tough, and it also left me wanting in terms of taste; blobs of tangy pesto on the plate helped to liven up its flavour. The salad, on the other hand, was crisp and fresh, and nicely dressed in its simplicity.

For our entrées, we naturally gravitated towards the pizzas. There are two styles of pizza on offer, and we went with the Old World thin crust pizzas without hesitation, after seeing that the New World medium crust ones were limited to your typical takeout pizza toppings. The individual-size thin crust pizzas range in price from $11 to $15, and can be made on gluten free dough for those with a sensitivity.

I chose the Napoli pizza, which was dressed with tomato sauce, pesto, roasted red peppers, artichokes, grilled Portobello mushrooms, Fontina cheese, and fresh basil. It was delicious! The flavours were in harmony, the toppings of good quality, and the mushrooms and artichokes exceptionally tender and meaty. 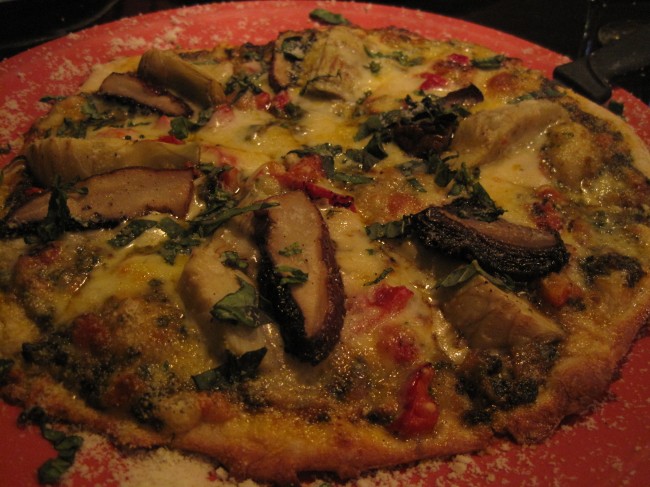 My boyfriend, going for the obligatory meat, went with the Siciliana with its tomato sauce, pepperoni, smoked prosciutto, Bocconcini cheese, sundried tomatoes and spinach. Again, it was absolutely delicious. I don’t think I would have changed much about that pie.

The pizza crusts were thin and nicely crisp throughout, with barely-there edges as the toppings spread almost to the extremities of the circle of dough. Both pizzas had been dusted with fresh Parmesan cheese – a nice touch.

From a wine list populated with international choices, but necessarily heavy on the Italian options, we opted for the good value house red wine, a Montepulciano d’Abruzzo. It was perfectly pleasant, and a nice accompaniment to the pizzas.

To end the meal, since I am almost unable to resist a little something sweet, we decided to order a dessert. We split the housemade tiramisu, which was delightfully light and creamy, if a little lacking in the presentation department.

Service at the restaurant was welcoming and courteous, although a little uneven at times, our order having to be reconfirmed by the staff on a few occasions during the evening for instance.

The large restaurant space is classy, and offers a good variety of seating arrangements, from small and large booths, intimate tables, large tables for groups, and seats at the bar.

The next time you venture in the direction of Elgin Street, consider walking a block east towards Dantessa if you are in the mood for a quiet dinner over delicious pizza and wine.

We love your reviews Gen, thank you so much for sharing!