Home » Fiona Tapp » Learning to switch, dunk and ‘get down!’: Fiona goes white-water rafting on the River

Learning to switch, dunk and ‘get down!’: Fiona goes white-water rafting on the River 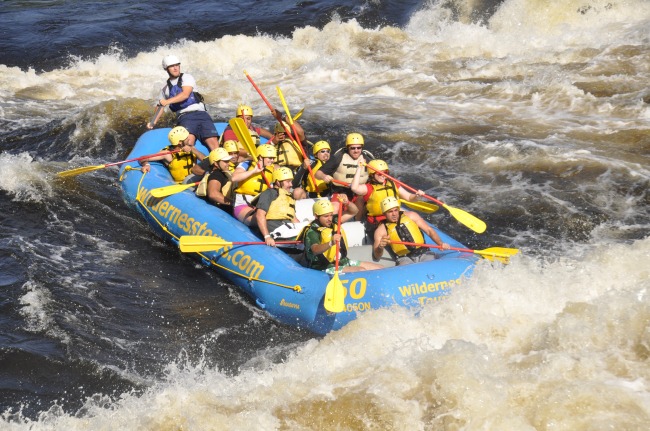 Rafting on the Ottawa River with Wilderness Tours

Fiona Tapp is a British elementary school teacher, who has called Ottawa home for the past five years. As a native Londoner, she tries to explore and enjoy Ottawa as a tourist and, so far, is pretty impressed with this “tiny but brilliant” city!

Looking for a little weekend adventure and encouraged by a half price offer from Livingsocial.com, my husband and I travelled about an hour and a half from Ottawa to Forester Falls on the Ottawa River, to experience a weekend of white-water rafting, camping and adventure sports at Wilderness Tours.

We arrived in time to put up our tent, but after a lengthy, rather disorganised check in — weekends are very busy here — we found it too dark to put up our tent and had to rent a cabin at a cost of $97. We were not expecting this cost and it would be an understatement to say we were more than a little grumpy! Our rafting trip was scheduled to be the first in the morning at 7.30 am, and so we settled down for an early night. Drunk “teendults” (combination of a teenager and young adult) woke me at 2am, 3am and 5am, screaming and running around the campsite (my hubby slept through it all), so by breakfast on Saturday morning we were ready to pack up our stuff, head home to our cat and mark the weekend up as lost. After a little discussion about the money we had already spent we decided to go on the rafting trip, and if we still felt the same way, we would leave as soon as we got back. 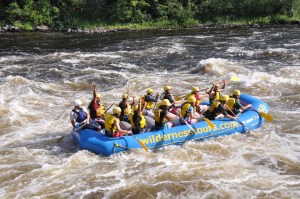 Paddling hard through the rapids

After a briefing in the amphitheatre, our group boarded three school buses and drove the short trip to the river, where we were kitted out with helmets, life jackets and paddles. I was a little nervous, especially about falling out of the boat, and counteracted this by chatting inanely with the other paddlers. Our raft consisted of two friends, who had both rafted before, and a group of eight novice paddlers on a stag weekend.

Once we set off, I realized we were not going to get far fast as the group were out of stroke using different paddling techniques and stopping for numerous breaks; as a dragon boat enthusiast for the past four years, I found this a little frustrating and my competitive streak felt wounded as other boats passed us. But I decided to relax and go with the flow, once we got to those rapids we would move with or without paddling effort!

On approaching every rapid, our guide, Joe, gave very detailed instructions on how we would proceed: “paddle hard”, “level 2”, “level 3” “switch” or my favourite, “Get down!” And then we would feel the pull of the current and away we went. Approaching the rapids was much like the clicking noise heard when you ascend a rollercoaster, the inevitability of the ride that awaits filled me with fear until we popped out the other end unscathed. 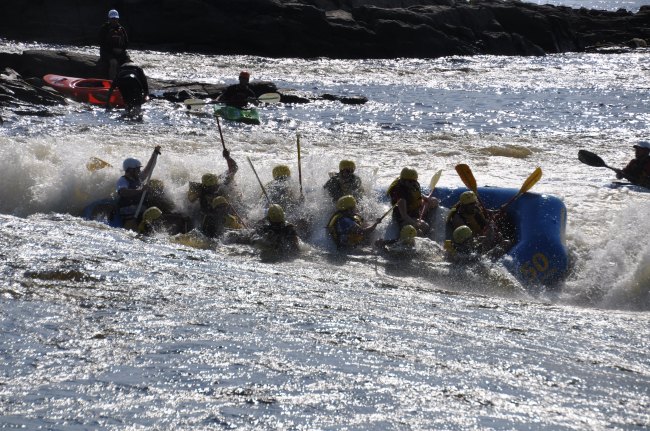 Rafters on the Ottawa River get dunked

On the first rapid, the raft after us lost 10 paddlers to the river, leaving only two lonely paddlers blindly clutching for paddles and bodies! Luckily no one was injured and our boat alone collected four paddles, a helmet and two (non-matching) shoes, highlighting the importance of securing your safety gear correctly and wearing sensible footwear.

The rapids have names intended to intimidate: Butchers Knife, Bus Eater and the Garbarator to name just a few. The river guides tell stories about these rapids with a tough guy persona that includes berating paddlers (usually just the men) yelling and instilling fear. However, this is all part of the river shtick and they are very professional, safety conscious and fundamentally nice people. My favourite of this theatre was when asked why he worked at Wilderness Tours, by a paddler, our guide, Joe, answered: “Well, I love people: Not you people, but people!”

We had a quick stop along the river for a snack — people paddling later in the day have a full lunch on their break — and then paddled down river to a spot where the brave could cliff dive into the water. I left this activity to my husband and waited with a few other scaredy cats in the raft.

Our last rapids looked innocuous and Joe explained that we might not even feel the pull of the current, however using his guide paddle, he managed to turn the raft up on its edge so that half of the boat were underwater and then switched so the other side could experience a dunking! 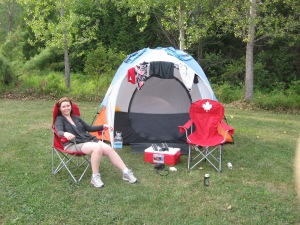 Paddling the short distance back to the bank was tough; we were tired from about five hours out on the water and everyone needed a nap. Once back to the buses, we were given a much needed drink and driven back to camp.

Our mood had indeed been lifted by this morning of high action adrenaline pumping adventure and we decided to stay. Now that our grumpy mood had lifted, we were able to see Wilderness Tours for what it is: a very well-appointed resort with lots of activities and resources; kayaking at the beach; a swimming pool; hot tub; games; mountain biking — you name it!

We enjoyed our lunch: meals here are served cafeteria-style and simple but tasty. We then moved on to the dreaded task of erecting our tent. A true test of teamwork, engaged couples should be forced to complete before being allowed to marry; we managed to put the tent up in under 30 mins without killing each other! Now that we had a place to lay our head (and weary river-battered bodies), we could really enjoy our mini vacation.

In the basement of the main building I enjoyed a hot shower and change of clothes before dinner, which was a yummy BBQ chicken with baked potato and apple crumble for dessert. The entertainment that evening was based on the theme of “The Wild West.” (Every summer weekend has a different theme.) The rain that evening dampened the party atmosphere a little, but the live musician’s rendition of “Use Somebody” by Kings of Leon was truly electrifying.

With heavy eyelids, we returned to our campsite and before my husband, J, had returned from brushing his teeth, I was fast asleep with an open book lying across my sleeping bag. Very heavy rain and thunderstorms woke us a few times in the night, as did a small leak into the tent which soaked my sleeping bag and forced me to snuggle up closer to J!

The next morning we enjoyed a hearty breakfast, relaxed and enjoyed the resort facilities. We didn’t get a chance, due to more rain showers, to take out a kayak so we are already planning next summers trip to ensure we experience all Wilderness Tours has to offer.

Wow! Despite the ups and downs (literally), sounds like quite the weekend. Thanks for sharing!

← Behind Beau’s: ‘Move the Family Back Home’ offers inside look at popular brewery OIFF spotlight: A Violent State ‘is not a love story’ →