Construction can’t stop it! Hilary Duff on her unique finds, food, and music at the Great Glebe Garage Sale

Hilary Duff is a quirky 21-year-old who loves multimedia journalism, cycling, food blogging, and churning massive amounts of baked goods out of her cramped student kitchen. When she’s not living the chaotically busy life of a Carleton journalism student, she also enjoys winter jogging and exploring the ins and outs of her Ottawa neighbourhood.

For the second year in a row, my experience at that crazy neighbourhood-wide event called the Great Glebe Garage Sale was nothing short of wonderful.

Unlike last year when my friend Gord and I awoke at the crack of dawn to set up our bake sale table, this year I blissfully stumbled out of bed at around 8:15 a.m.  I quickly realized that I was already late for what is arguably one of the biggest deal blitzes in city.  I got ready for the day in record-breaking time. 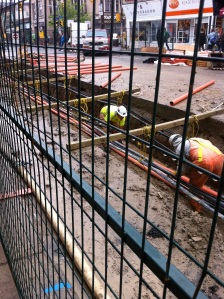 Despite the construction along Bank Street, the Glebe was already buzzing with activity.  Streets were packed as people flitted in and out of cluttered yards, greedily holding their newfound treasures.  It was not rare to see someone riding a bicycle with ski polls sticking out of their backpack, or middle-aged women dragging filled-to-the-brim carts behind them.

Being the over-connected little techno lover that I am, I decided to live tweet my entire experience.  I took it upon myself to be the unofficial #gggs (the hashtag for the day) tweeter.  At one point in the morning I was even trending in Ottawa.

I felt like I was finally living up to my famous name (please refrain from judging my nerdy excitement). 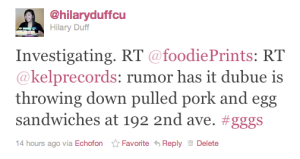 I also used tweeting as a way to distract myself from the nick-nacky purchases that would have broken my wallet otherwise.  Having been abandoned by my two friends in favour of breakfast at Kettleman Bagels, I wandered solo through the crowded streets, searching out interesting stories and scenes.

One of my favourite spottings from the day

Hidden amongst the average “I’m emptying out my basement and want to sell this dusty old lamp” yard sales, there were also some unique vendors.  Not everything was necessarily secondhand “junk” either.

While this is her first time at the Great Glebe Garage Sale, she’s been doing pottery since she was 12.

“I had quit all the sports my mom signed me up for, so she handed me the City of Ottawa book and said I had to pick something.  There was a picture of a girl playing with mud, and so I signed up for pottery,” she said.

Teri Anne calls pottery her main hobby, and said that button making is the hobby to her hobby.

“I’ve wanted a button maker since I saw the movie Empire Records, and so a couple of years ago I sold enough pottery to afford to finally buy one,” she smiles. 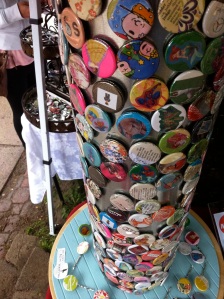 I walked away from Teri Anne’s booth with a cool ring, a button featuring a cute penguin and three postage stamp-inspired magnets.  A cool $12.

Of course, what would a day be without me searching aimlessly for some sort of baked good?  My prayers were answered on Fourth Avenue, just a short stroll in from Bank.

Set up inconspicuously between a table of random do-dads and a homemade clothesline display of crafty supplies, there sat the prettiest bake table I’ve ever seen.  I guess I shouldn’t be surprised, since their maker, Jennifer Barnaby, is a Cordon Bleu trained pastry chef.

The things you learn about people, huh?

This isn’t the first time Jennifer has sold at the Great Glebe Garage Sale.

“What I like about this sale is that people come back year after year to buy things.  It’s a nice way to get back into the community,” she says, reflecting on her past experiences.  “People come by and say ‘oh I remember you, I ordered a cake last year,’ and it’s fun.  I love it.”

Jennifer isn’t baking for personal gain either – every single penny she makes is donated to the Nepalese Youth Opportunity Fund, a non-profit organization that provides education and support for Nepalese children.  More specifically, Jennifer says it takes a donation of $75 every month to prevent a young girl from being sold into the sex trade.

Delicious treats for a good cause?  I was sold.

Since I wasn’t full enough from Jennifer’s scrumptious treats, I headed over to 192 Second Ave. where Don and Jenn at foodiePrints had passed on a Twitter rumour of pulled pork sandwiches.  Indeed they were correct. 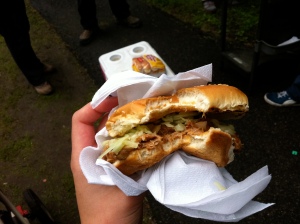 The front yard BBQ was a nice contrast to the standard hot dog carts and food trucks that cluttered other street corners.  The sandwich was delicious, and it was nice to meet Soren, Mike, Danielle and Spencer, all of whom were gracious and friendly as I awkwardly asked them questions on the stoop of their house.

Soren said a lot of people had found out about the BBQ over Twitter, and had come to them because of that.

“This is our first year (doing a BBQ), but we saw some people doing it last year and thought it was a great idea.  Our buddy Quinn at Quinn’s Ale House gave us the idea for the pulled pork so we thought we’d try the idea out and so far so good,” he said.

Finally, there was also some great music to be had at Saturday’s event.  Ecology Ottawa had a great band playing, and people could be seen hoola-hooping on the street to the tune of the harmonica solos.

The soundtrack to my Great Glebe Garage Sale, however, came from the unique melodies of Robin and John – two guys playing clarinet and accordion on the corner of Bank and Third.  Both are members of the Ottawa-based group Dry River Caravan, and urged me to mention them in anything I write.  Shameless promotional plug aside, I was captivated.

All in all, it was a fun way to spend my Saturday morning.  The rain held off for the majority of the time and I managed to find some treasures (yes, I still ended up spending some of my money).  Purchase highlights include a silver platter for food blogging, two handcrafted rings, several colourful silk scarves, and a cameo pendant that I intend to make into a necklace.

What were your favourite finds from the day, Ottawa?