Hilary Duff (blog/Twitter) is a quirky 21-year-old who loves multimedia journalism, cycling, food blogging, and churning massive amounts of baked goods out of her cramped student kitchen. She is currently writing an LTOttawa series on her hunt for Ottawa’s perfect cupcake.

Eating a cupcake from L’Oven is a completely guilt free experience.

Okay, well almost completely guilt free.  While all the cupcakes I’ve sampled so far have had one unique selling point, L’Oven’s cupcakes are chalked full of these USPs.  In fact, they may be the most innovative cupcakes so far.

But before I explain more about that, let me introduce you to Jackie Moore and Holly Hutchings, the sisters behind the creation of L’Oven.  Late last month I went to meet Jackie and Holly at the Tea Party Café, an intimate and adorable teashop in the ByWard Market.  Inside, two enthusiastic blondes greeted me, both eager to explain the inner workings of their sisterly enterprise.

It started like this.  Jackie and Holly had grown up baking.  To them, baking was like a chemistry experiment, and their actions fiddling around in the kitchen with their mom and grandma’s recipes were apparently comparable to a mad scientist’s experiments.  This love for kitchen chemistry led Jackie and Holly to get their degree in health sciences and meant that the two were well on their way to continuing their lives as recreational bakers.

Everything changed, however, a few years ago when Jackie was diagnosed with colon cancer.

From this point on, baking became not just a hobby, but also a way to help keep spirits high, in and outside the kitchen.  Since traditional cupcakes weren’t the healthiest option for recovery food, Jackie and Holly put a spin on the conventional ingredients, and instead created a product meant to be both healthy and delicious.  And so the “immune boosting” alternative cupcake was born. Looking back on Jackie’s diagnoses, the sisters say their story is a true example of this “from the worst comes the best” mentality.  Jackie’s cancer is now in remission, and L’Oven has been operating their on-demand, virtual bakery ever since. 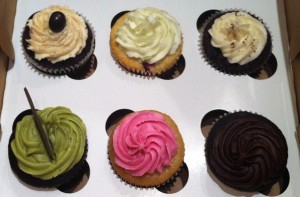 If you’re wondering what I mean when I say “untraditional cupcakes,” let me break down L’Oven’s product for you.

Jackie and Holly take pride in their use of alternative ingredients to replace the things that make normal cupcakes so unhealthy.  For example, pureed beets or parsnips replace all fats and oils.  This means that L’Oven can also cut back on the amount of sugar they put in their cupcakes, since it comes naturally from the vegetables.  All the flour used is whole grain, which is a healthier choice than the traditional white flour.

The cupcakes contain no artificial flavours or colours and the fruity ingredients contained within come from local sources, when possible.  On top of all this, half the cupcakes I tried were vegan and all were made with organic ingredients.

Crazy right?  Sustainable, healthy and tasty – these seem to be the founding principles of L’Oven’s business.

Speaking of taste, I wasn’t really sure what to expect of these cupcakes.  I’m a little hesitant of trying new things (even when it involves cupcakes), so wasn’t sure if I would be able to taste a major difference with the use of all these unconventional ingredients.

Luckily my worries evaporated as soon as I took the first bite of cupcake.

The ‘wow’ factor for me was the icing.  While only a small amount of icing rested atop each cupcake, the flavours were creative and delicious.  The use of natural ingredients meant that every flavour tasted exactly like it should. 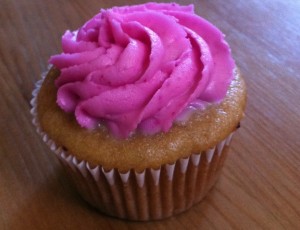 Be it the dark chocolate avocado icing, maple buttercream or matcha green tea buttercream, all were unique and refreshing.  I particularly loved the lime cream cheese icing, and the speckles of lime zest gave the icing a citrusy zing.  The flavours of the cupcakes themselves were nothing to scoff at either – a dark chocolate and red wine cake (a twist on the traditional red velvet) and an organic vanilla cake with fresh cranberries from Greeley. 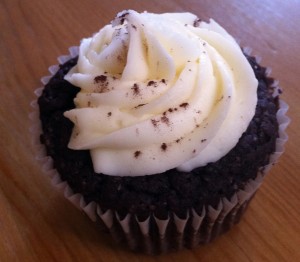 The only cake that took a bit of getting used to was the vanilla cupcake with pureed parsnips.  The taste of the cake surprised me at first, and my mouth was filled with a fresh garden sensation when I took a bite.  This isn’t necessarily a bad thing, but may be enough to turn off the picky cupcake eater and starved sugar lover.

If the allure of healthy desserts is calling your name, you might soon get the chance to try out Jackie and Holly’s recipes for yourself.  The sisters are currently working on their first cookbook that is meant to be a learning tool for those looking to be healthier in the kitchen.  The book won’t just be limited to cupcakes, and will contain a whole slew of new baked goods that even the most nutrition-conscious people will love.  Jackie and Holly say they’re expecting the first draft to be done in May, so keep your eyes peeled for L’Oven’s book debut sometime in the near future.

As for the final verdict on L’Oven?  It’s definitely possible to be healthy and delicious simultaneously.

Do you know of a cupcake shop that Hilary should check out? Leave a comment below!