Home » David Kawai » Anyone for pho?

David Kawai is a very talented photographer living and working in the capital. If you’re looking for the best pho in Ottawa – he is the guy to ask.

Looking for the best pho in Ottawa? Check out these two restaurants in Chinatown.

It must be five years now since my obsession with pho began. I blame my brother and father, both closet foodies with huge appreciation for authenticity, and also my travels in Vietnam—where most of my uncertainties about pho were put to rest, including the correct pronunciation of the name…

Nobody likes to be told how to make, eat, or say the name of their food, but just in case you didn’t know where to get the best pho in Ottawa (I promise, I’ve been looking for a while), go to Somerset St. W and Lebreton St. N., just a block east of Booth St. in Chinatown.

On the north side of the road, you’ll see the restaurants side by side: Pho Thu Do and NEW Pho bo ga LA (though, take note: Pho Thu Do, ultimately my favourite, will be moving literally a couple doors west at the end of December).

Getting to the point, the broth at Pho Thu Do is nothing short of amazing. For this reason, I mix in all the raw ingredients provided, comsume a third of the serving, then gradually pour in some hot and/or hoisin sauce as I begin to crave more spice and heat. I can never leave without leaving the bowl empty. 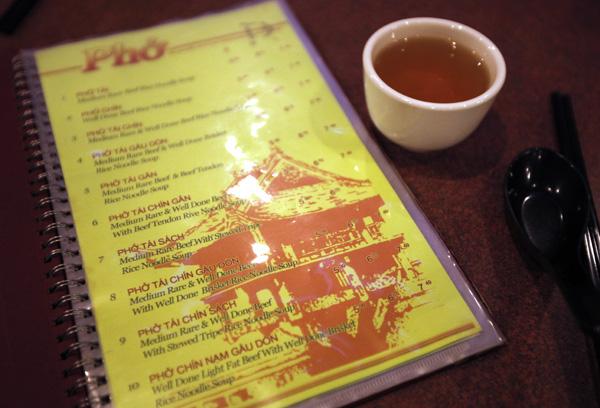 Pho Thu Do. Number 8 if you eat beef.

NEW Pho bo ga LA has a tasty broth, but compared to next door, you might notice something missing. The taste is not as deep or complex. And so, I mix everything in, including sauces, from the very beginning. But give credit to New Pho bo ga LA for using red chillies, which is the only type I saw used in the homeland…

NEW Pho bo ga LA Happy Hour menu. Request it if you want it. Sometimes they will give you the regular menu, which is also great.

While I prefer to order more traditional and simple ingredient soups from Pho Thu Do —I recommend #8 if you eat beef,— New Pho bo ga LA offers a good many options on their specials menu, including a spicy tomato-y soup, and a “Hue” special soup, both of which are great. But you won’t find it on their Happy Hour menu, which you can only get between 10 p.m. and 4 a.m. on Friday and Saturday.

Pho Thu Do. Ingredients for 4. Always fresher than most places. 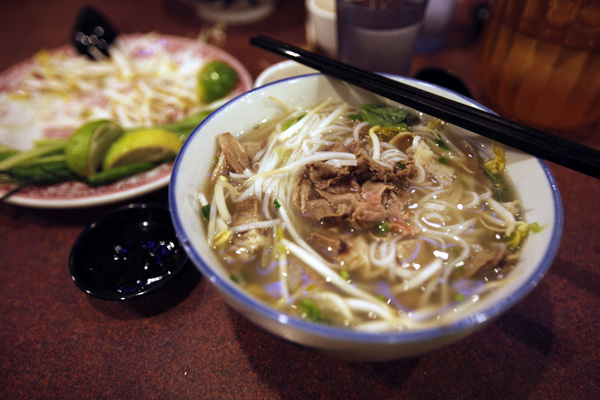 The late Happy Hours deal at NEW Pho bo ga LA is probably the biggest pull of the restaurant for me. And, although the portions are significantly smaller (you get a bit less than a small portion), it’s probably not healthy to eat too much so late anyhow… possibly after the bar, or maybe Bluesfest, as it so happened with me this past summer. Also worth noting is how the West has taken pho, normally served in a small bowl for breakfast and turned it into a gigantic communal dish sized portion for dinner. 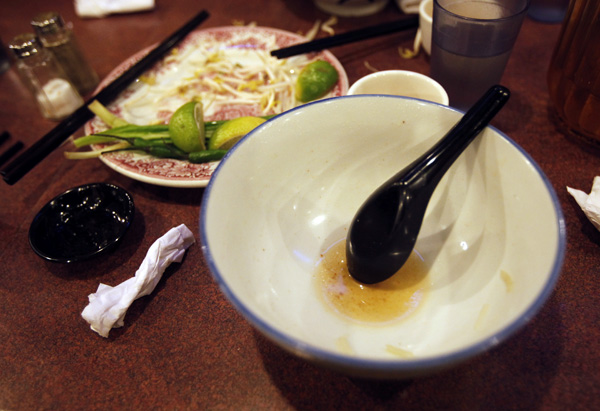 Pho Thu Do. My review.

Do you have a favourite spot for pho or another restaurant you’d like featured on LTOttawa? Send us a note.